This project was conceived 12 years ago by Peter Ramsay BEM, then President of the Vietnam Veterans Association of Australia (WA Branch Inc).  Several attempts to get the project underway have been made over the intervening years but due to a myriad of issues, chiefly because of other events at ANZAC Cottage, did not go ahead.

Once the Centenary of ANZAC Cottage in 2016 had been done and dusted the project was revived through the Friends of ANZAC Cottage and once funding was secured through the City of Vincent, Rosewood and Bendigo Bank, North Perth Branch and with in-kind support from Mount Hawthorn Primary School and the New Zealand and Australian Defence Forces, the project has become a reality.

The project involves refurbishment of the existing bus stops on Kalgoorlie Street and on ANZAC Road to reflect the ANZAC Cottage story.  The Kalgoorlie St bus stop will reflect Gallipoli as the Cottage was built as a memorial to those who lost their lives at this landing. The ANZAC Road bus stop will reflect Nui Dat reflecting on the efforts and dedication of the Vietnam Veterans Association of Australia (WA Branch), which led by Rob Cox OAM and Peter Ramsay BEM in the 1980s and 90s, restored ANZAC Cottage to its former state thus saving the Cottage from imminent demolition.  It is worth noting that Nui Dat was the base for ANZAC troops in Vietnam.

How it will be done

Artist Drew Straker has provided concept designs for both of the bus stops..  Drew will paint these murals onto metal sheeting that will be attached to the existing structures.

The construction of the sandbag component

To explain, the ‘sandbag’ component is not as easy as it seems and the Friends have contracted the New Zealand Defence Forces and the member of the NZDF who oversaw and implemented a similar project in New Zealand to undertake this complex procedure. 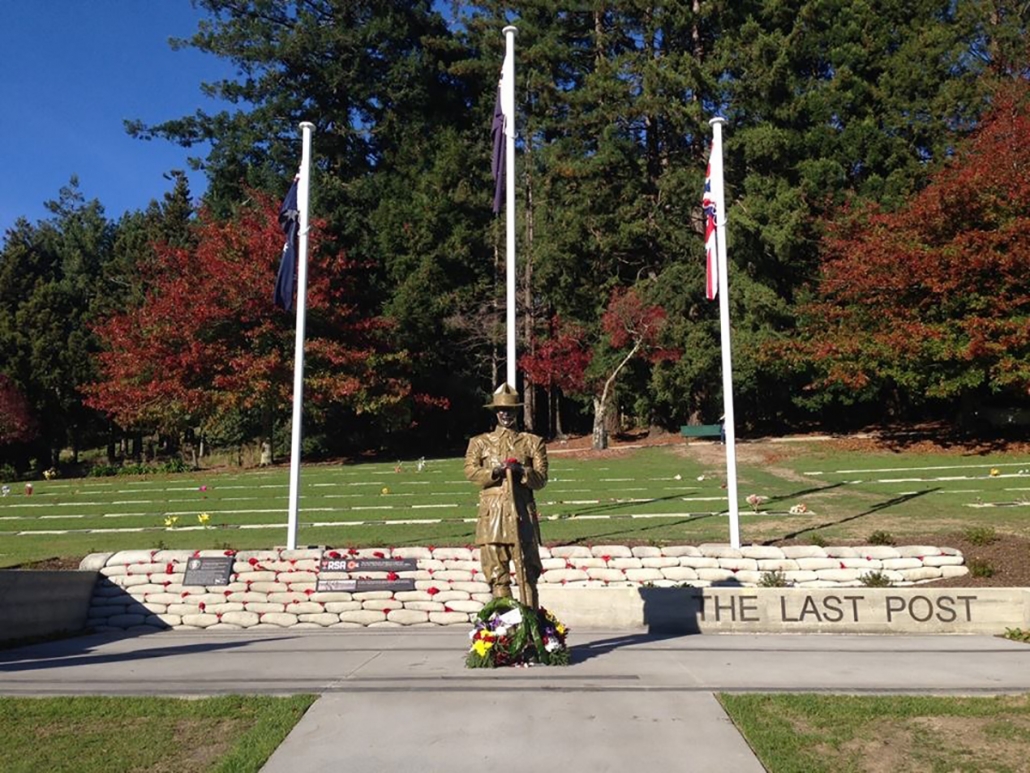 The Friends have applied for funding to bring this gentleman to Perth, along with accommodation and meals and he will be able to apply his knowledge of the execution of this part of the project.  He will be assisted by labour and assistance from members of the Australian Defence Forces.  It is this collaboration that makes the project a true “ANZAC” project and has strong connections to the fact that the project is due to be launched in 2018 , the centenary of the Armistice.

Biff  To hit or punch.

Birl  To ‘give it a birl’, a fair trial; sometimes a suggestion that a certain proceeding has gone far enough.

6/– a day tourists used as a term of derision for the privates of the A.I.F., particularly to the volunteers of 1914, because it was alleged by some that they expected the war to end before they could be fit to take the field, and therefore enlisted merely for the pay and opportunity to travel.

Crool the Pitch  To spoil a chance, or the further exploitation of some enterprise.

Short: Refers to the number of days you have left to complete your Tour of Duty which was usually 12months or 365 days, example if you have 10 days to go before returning home you are Short

Blowfly: Refers to the Unit Hygiene person serving with the Company Medic or Regimental Aid Post would be Medical Corps. Was responsible for hygiene within the unit lines eg: long drop toilets, bucket showers and Cook House

Bait Layer: Referred to the Unit Cook or Cooks. These guys worked under extreme conditions to provide the best food they could from limited sources and with limited equipment

ANZACs in Vietnam: The 2nd, 4th and 6th Battalion of the Royal Australian Regiment were, for the Vietnam War, renamed as ANZAC Battalions, eg 6 RAR/NZ ANZAC Battalion, with an Australian Commanding Officer and a New Zealand Second in Command. Each battalion had an Infantry Company from the 1st Battalion Royal New Zealand Infantry Regiment(1RNZIR) based in Terendak Camp Malaysia attached for the Tour of Duty. The Companies were named either Whiskey or Victor, there were three Whiskey Companies and six Victor Companies who served with the Australian Battalions. Not every Vietnam Veteran has the privilege of being an ANZAC only the Australians and New Zealanders who served with these Battalions.

Vung Tau Ferry: HMAS Sydney an Aircraft carrier was converted to carry Australian troops to and from Vietnam, and acquired this name

Vungers: Refers to Vung Tau the port where Australians disembarked and embarked from or too the Vung Tau Ferry.

XXXX: Beer from Queensland, spelt this way because some servicemen couldn’t spell

Albatross: Refers to the Iroquois Helicopter which carried troops and supplies

Bushranger: An Iroquois Helicopter converted to a Gunship with 2.75mm Rockets, mini guns and two Crewmen as door gunners

Spooky: Converted Dakota AC-47 aircraft operating as a gunship with three mini guns mounted on the left hand side of the aircraft providing close air support to ground troops

Dust Off: An unarmed Iroquois Helicopter carrying casualties from the battlefield either by landing or winching out through the jungle if they could not land either because of terrain or enemy activity